Traveling to the Madrid subway 100 years ago is already possible thanks to 3D printing. An agreement signed between Metro Madrid and Aitiip Technology Center has allowed to reconstruct the MR9 Cuatro Caminos car model at 1:14 scale . And the reconstruction has been total, without leaving any detail.

It was from old photographs and archival resources that the team formed by Metro Madrid and Aitiip Centro Tecnológica has been able to digest these wagons, creating from scratch the “digital plans” that were subsequently printed at Aitiip Technology Centre facilities.

The floors, the textures of the seats and the stage, the steering controls, the signs , the window frames and doors...everything has been rebuilt with maximum precision by the collaborative work between Metro Madrid heritage team and the engineers of Aitiip Technological Center.

The result delivered to Metro Madrid is a model of a meter long, totally realistic , in which even luminaires have been installed to recreate the old lighting . The final finishing, which impresses, has included a careful , detailed and carefull painting process that crowns an excellent sample of historical recreation of cultural heritage through the combination of technologies such as 3D printing and the work of conservation of historians and archaeologists.

The model is currently exhibited at the Museo ABC in Madrid, and is open until Sunday 8 December.

This car covered since 1919 the 3.48 kilometers from Sol to Cuatro Caminos at a maximum speed of 55 kilometers per hour , I passed NDO six intermediate stations. The car measured 11.75 meters long and in it could hold 114 people in the car engine and 120 in tow. This car was running until the 80s.

3D printing, together with digital reconstruction or three-dimensional scanning, is consolidated as a decisive tool for the recreation and enhancement of historical and archaeological heritage, this being a clear example.

The model has been built by 3D printing with polyjet technology through which quality and precision are inherent characteristics of the final piece. The printer is able to make depositions of material in layers with a thickness from 16 microns. The finishes of the pieces are so precise that it is impossible to detect the different layers. This high resolution makes this technology ideal for making models and prototypes in which the final finish and the aesthetic result is decisive.

This 3D printer is Objet 1000 Plus ( Stratasys ), an industrial printer capable of making pieces of large sizes 1000 x 800 x 500 mm, which can combine different materials, hardnesses and colors in the same piece. Its constructive richness allows to print with transparent materials . You can also get pieces with rigid parts or the opposite: soft and flexible parts similar to rubber. 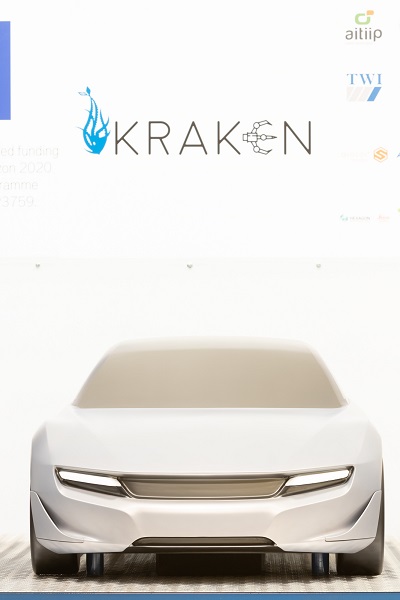 In Aitiip Technological Center it is also possible to manufacture parts of up to 20 meters by means of the own technology manufacturing system, Kraken.

This system, which combines resin and metal, allows the manufacture of very large prototypes and models , such as designs for architecture, creative and cultural industry, transport sector in concept phases, as well as large models for wind tunnel in the case of the aerospace industry.

An example has been the production of a scale model 1: 2 of one of the latest Pininfarina car models . This construction aimed to validate the design of the new model, designed by computer.

Aitiip Centro Tecnológico is a leading entity in 3D printing systems, having its own technology and having one of the most complete additive manufacturing workshops in Europe.